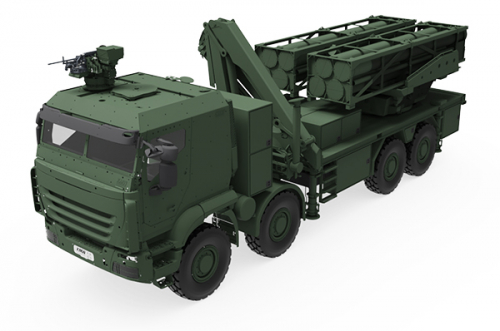 KMW and Elbit have established the concept “Euro-PULS” for the next generation European Long Range Rocket Artillery as the successor system for the MLRS. 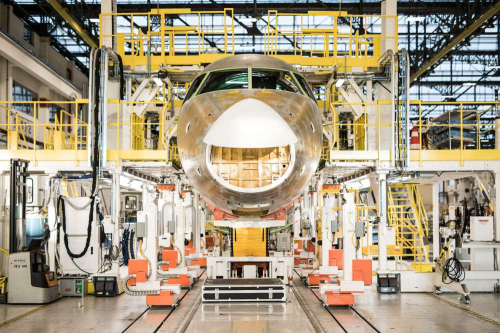 Embraer, together with other Brazilian entities of the Security and Defense sector, support the lawsuit against Boeing for its strategy of co-opting Brazilian engineers, reports AviacionLine.

The C-DOME is an advanced naval configuration of RAFAEL’s IRON DOME aerial defense system and is operated from the Missile Ship (INS) ‘Oz’ from the Sa’ar 6 ‘Magen’ Class Corvette.

Sébastien Lecornu, French Minister of Defense, confirmed in an interview that France has delivered two Crotale NG anti-aircraft systems and two Unitary Rocket Launchers to the Ukrainian Armed Forces. He also announced that a Ukrainian request was also being analyzed by the Ministry of Defense.

Ukraine's missile defense system makes a splash with the Iris-T

The recent Russian cruise missile strikes are also accompanied by numerous videos of interceptions. With the increase in quantity but also and above all in quality of the equipment delivered, the Ukrainian anti-aircraft defence is gradually becoming more powerful. The German Iris-T medium-range system seems to be particularly effective against Russian air targets.

Little by little, the US Air Force is preparing its future systems, including future UAVs to accompany manned aircraft. To achieve this, many projects and prototypes have been developed, including the XQ-58A. The latter had carried out its flight tests in Arizona, and the transfer to Eglin Air Force Base in Florida heralds the start of full-scale tests, including the accompaniment of manned combat aircraft, in complete autonomy.

The United States, the Netherlands and the Czech Republic have arranged to deliver 90 T-72B tanks to Ukraine, but before they are delivered, some systems will be upgraded. Deliveries of anti-aircraft equipment also continue, with a new Italian system. Italy is also talking about the possibility of delivering long-range anti-aircraft systems. The list of recent deliveries continues with technical support from Lithuania, the delivery of Greek armor and perhaps a future delivery of Swedish self-propelled howitzers.

Brasilian private firm Akaer is showcasing its Albatross combat drone at Indo Defence 2022. The first push was made during the last Farnborough AirShow.

EDGE Group PJSC is participating at Defence Indo 2022 for the first time and is marking a major presence with an eye on Indonesia and other Southeast Asian defence markets.

Embraer announced today that it has signed several Memorandums of Understanding (MoUs) with the aerospace companies ASTG (Aerospace Technology of Global), EMK (EM Korea Co.) and Kencoa Aerospace, from South Korea with the objective of strengthening collaboration with Korean defense industry partners for the future supply of parts for the C-390 Millennium aircraft.

During a statement in the House of Commons, Ben Wallace, the British Minister of Defence, announced that on September 29, a Russian Su-27 fired into the patrol area of a British RC-135W after being intercepted. This dangerous manoeuvre raises questions and the RC-135Ws are now escorted by armed fighters.

The EMALS and AAG of the future French aircraft carrier

The New Generation Aircraft Carrier (known in France as PANG) will be equipped with the latest generation of electromagnetic catapults (EMALS) and arresting strands (AAG). These two very recent systems will provide the French Navy with the latest technology for catapulting and landing aircraft.

Malaysia recently announced via Twitter that Leonardo will soon receive an order for two ATR 72MPs to reinforce and above all modernize Malaysia's maritime patrol capabilities. The purchase of three UAVs from Turkish Aerospace Industries should also be added.

The concept of stealth is much broader than the simple principle of avoiding the return of radar waves to its transmitter. The Rafale and the F-22 are thus based on different concepts.

With the October 10-11 bombings of Ukrainian cities, deliveries of modern anti-aircraft systems appear to be accelerating for the United States and Germany. France has also announced the delivery of anti-aircraft systems in the coming weeks, and other countries are expected to follow suit.

DGA Essais en vol carried out two test firings of laser-guided bombs (GBU-12) at the Cazaux site, in cooperation with the French Air Force, after a rehearsal flight on September 30.

Malaysia recently announced via Twitter that Leonardo will soon receive an order for two ATR 72MPs to reinforce and above all modernize Malaysia's maritime patrol capabilities. The purchase of three UAVs from Turkish Aerospace Industries should also be added.

Ukraine has very recently received the German anti-aircraft system IRIS-T SLM. This modern missile system can destroy a large number of different targets and represents a real step up for Ukrainian air defense.

The French Air Force is resuming an earlier-than-expected tour of policing the skies as part of NATO, and with Rafale fighter jets. France is also sending a squadron of Leclerc tanks and VBCI armored vehicles in the coming days, bringing the number of troops in Eastern Europe to nearly 1,500 once the deployments are complete.

The NGAD towards the collaborative combat phase

Since 2019, the 6th generation fighter demonstrator developed under the "Next Generation Air Dominance" program has been conducting ground and flight tests. But the future American fighter aircraft is part of a family of systems and will therefore be accompanied by various models of drones.

Russian aviation: the carnage also continues for its modern fighters and helicopters

Russian air cover in Ukraine seems to be gradually decreasing: Russian fighters remain over Russian lines or even in Russia or Belarus. But on several occasions, fighter aircraft have raided Ukrainian positions. As a result, on 24 September alone, four modern fighter aircraft were shot down by the Ukrainians.

Sabena Technics integrates Héli-Union, which becomes its helicopter division, taking over STM's activities in the Bouches-du-Rhône region: the whole group will weigh heavily in the French helicopter MCO market.

New deal for the SCAF: the program is finally moving forward

During a visit to Germany, the French Minister of the Armed Forces declared that the 6th generation fighter aircraft developed jointly by Germany, France and Spain as part of the SCAF program remains a priority. These announcements reveal discreet progress far from the cameras.

Defense: a draft budget that enshrines the return of deliveries

After years of a dearth of new aircraft deliveries, the Air Force will be paid for its patience in 2023.

Air exercise in the Baltic: between defense and deterrence

For two days, two dozen aircraft and ground forces jointly trained for air defense operations in the Baltic. This exercise is part of NATO's recently adopted defense and deterrence policy. It is also taking place not far from the Kaliningrad exclave, whose Russian military potential is constantly monitored by numerous reconnaissance and electronic warfare aircraft.

With more than 100 years of existence, SABCA is part of the Belgian and European aeronautical/aerospace landscape. After Ariane 5, Vega and the future Ariane 6, SABCA will also participate in the Themis program. This launcher should enable Europe to have a launcher capable of being reusable in order to be able to compensate for the other offers present on this growing market.

These multiple rocket launchers will soon be delivered as part of a new American aid package. This assistance is focused primarily on two areas: deep strike with the additional HIMARS and various transport vehicles. With the resumption of the war of movement, these assets will increase the mobility and firepower of the Ukrainian Army.

In order to keep pace with the changes in the British Army and to meet the need for mobile anti-tank capabilities, MBDA has developed two prototypes equipped with Brimstone anti-tank missiles. Long-range artillery is not left out, as MBDA also offers the new Land Precision Strike missile for the British M270 MLRS.

The Air Force and Space Force's E-3F Sentry aircraft will soon be fully operational within NATO with the integration of the latest version of Link 16. This secure tactical data link streamlines international operations between the armed forces of NATO nations.

Between the North Sea and the Baltic Sea, NATO flies its fighter planes

Seven months after the start of the war in Ukraine, Vladimir Putin's speech on the morning of September 21 reignited the escalation on the sidelines of a general assembly held at the United Nations. A few hours later, the journalistic and OSINT community noted the presence of numerous military aircraft in the air over northeastern Europe, linked to a NATO exercise in the region.

NASAMS to be delivered to Ukraine soon?

After heavy artillery systems, Ukraine is looking for modern anti-aircraft systems. According to CNN, the United States will soon announce the delivery of several Norwegian Advanced Surface-to-Air Missile Systems (NASAMS) to the Ukrainian Armed Forces. This system is in service with 12 countries and is notably deployed for the air defense of Washington D.C.

Germany releases list of its military aid to Ukraine

For some time now, Ukraine has seen an increase in its self-propelled artillery capabilities. France, Germany and the Netherlands have announced the upcoming delivery of self-propelled howitzers. Ukraine has also contracted for rapid deliveries with Poland and the Czech Republic. The Ukrainians will also receive American and probably British rocket launchers with a range of 70 kilometers in less than a month.

On June 1, the Federal Ministry of Defense officially announced its choice in the Schwerer Transporthubschrauber (STH) program: the German CH-53s will be replaced by CH-47F Block IIs.

Germany is leaning towards the Boeing-Airbus Chinook

Germany is looking to replace its fleet of CH-53 heavy-lift helicopters. The Germans have two options: the H-47 from the Boeing-Airbus consortium or the CH-53K from Lockheed Martin. According to several German newspapers, the Boeing-Airbus Chinook has won the contract.

What destination for the planes carrying aid to Ukraine?

With the start of the offensive, the various cargo planes could no longer land directly in Ukraine. Poland has therefore made one of its airports available. This airport offers several key advantages for the continuation of military and humanitarian aid to Ukraine. The security of this airport has also been greatly increased in the face of various threats from Russia.

The two Turkish A400M are still blocked in Ukraine

Shortly before the start of the war in Ukraine, Turkey sent two A400Ms to Kiev. According to the Ministry of Defense, they were on a humanitarian mission. The two planes landed in Ukraine, but the closure of the airspace means that today Turkey can no longer use these two aircraft which are de facto immobilized.

Germany is said to be on the verge of announcing its willingness to buy about 35 U.S. F-35 fighter-bombers to replace its aging Tornado IDS, of which about 75 are still in service with the Luftwaffe.

The Ukrainian Foreign Minister confirmed in a tweet that the An-225 was destroyed. By late morning, video from a drone over Antonov airport already showed the aircraft on fire in its hangar, leaving little doubt as to the condition of the aircraft.

Ukraine: The news feed to know everything about the conflict

This article was last updated on 24 February 2022 at 14:20. The article will continue to evolve as events unfold.

France and the war in Ukraine

Two weeks ago, our subscribers discovered a dossier in Air & Cosmos questioning France's possible contribution to operations in Ukraine. An open war has now begun in Ukraine. Emmanuel Macron was this morning in a defence council that follows yesterday's.

Updated map of the crisis in Ukraine

This map presents a collection of open-source data available in the Russian invasion of Ukraine, mainly on social media. It is an incomplete overview of the situation and is constantly evolving according to the data collected.

U.S. Navy ramps up with first Ospreys in service

Announced in 2017, the CMV-22B Osprey is in the process of replacing the U.S. Navy's first C-2A Greyhound aircraft. This replacement reached a major milestone on February 17, 2022 when the CMV-22B received its Initial Operating Capability.

US Navy ramps up as first Ospreys enter service

Announced in 2017, the CMV-22B Osprey is replacing the US Navy's first C-2A Greyhound aircraft. This replacement reached a major milestone on 17 February 2022. The CMV-22B received its Initial Operating Capability.